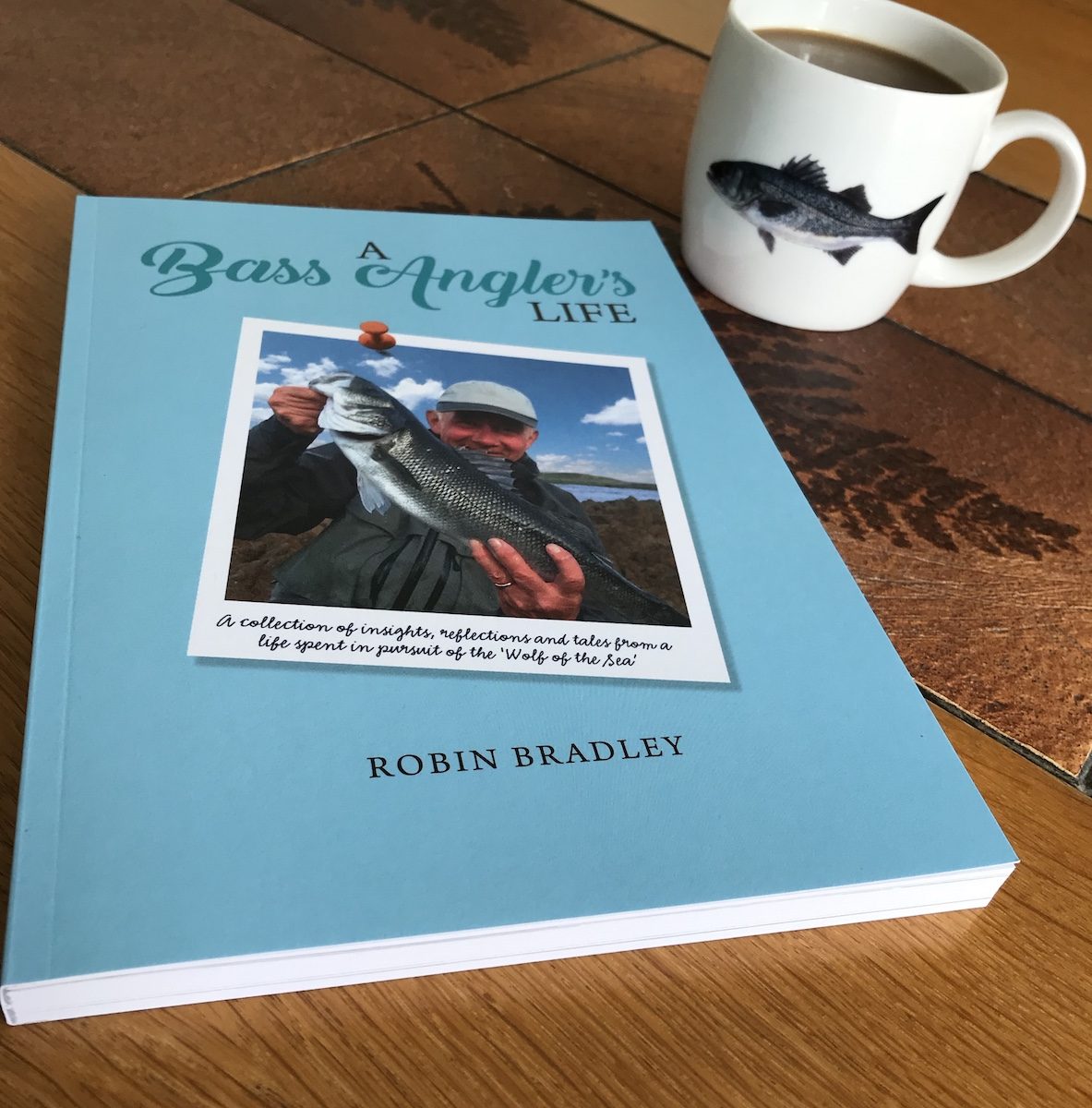 A book on bass fishing, and life

Today marks the first anniversary of my book on bass fishing A Bass Angler’s Life going on sale. Twelve months on, I can say that the book has been a success – perhaps not in financial terms (as yet), but most definitely from a personal perspective.

Achieving a long-held ambition to have a book on bass fishing published has been very satisfying, and A Bass Angler’s Life  has brought me into contact with many people. I always thought its appeal would be to a niche market, by virtue of its slightly different content – it’s about life, as well as bass fishing. It may not follow the usual format, but hopefully I’ve got the balance right. It was the book I wanted to write, and I’m delighted and honoured that more than 170 people have so far bought it. If you’re thinking of buying a copy yourself, you can see an electronic preview of the book here,  and you can also read a short story from the book on the BASS blog.

The many kind messages people have sent, and comments made, about A Bass Angler’s Life, have been particularly rewarding, and gratifying. Some of the comments are shown (with permission) on the book reviews page of my website. If you’ve read the book yourself, and would like to comment, please let me know.

There’s no getting away from it – things are pretty tough at the moment, with some anglers in Cornwall reporting that this is their worst start to a season ever. I cling to the hope that this might be down to natural phenomena, like the availability of baitfish, but increasingly I’m getting concerned that this is down to the sustained and cumulative effects of netting.  A recent press release from SOSB  draws attention to this, and poor catches on my home patch over the last 12 months or so certainly reflect this increase in netting. If you haven’t already written to your MP about this, please do – even if you’re not from Cornwall. Remember that at some point fish from your area may be migrating along the south coast of Cornwall and subject to removal by these monofilament killing machines, leaving you wondering where all your fish have gone next summer.

There does seem to be quite a few fish around in estuaries at the moment, but these are mostly small (30cm).  Scales I’ve taken from one of these suggest that they are 3 years old – so from the 2017 year class.

I’ve been picking up the odd fish here and there on the coast, including several on 5.5 inch Swimsenkos. I can still remember catching my first bass in Ireland  on one of these lures (in green) back in 2014. For some reason, I only started using them in Cornwall recently, prompted by an entry in MikeLadle’s online fishing diary – pity I left it so long!

My very first cast with a white Swimsenko produced this bass of about 3lb.

That’s enough to give anyone confidence in a lure, and although I didn’t catch any more that night, I have caught more on subsequent sessions, including on a dark blue one. Oh dear – I hope this isn’t the start of another soft plastic obsession!

Some nice bass are being caught in other areas though – like this 76cm (fork length) beauty which Mike Ladle took on a freelined mackerel fillet. I reckon this is equivalent to about 81cm total length (x1.07), which the BASS tape puts at 12lb (nice one Mike!). He was disappointed by the lack of resistance the fish put up when being caught. This put me in mind of an excerpt from Don Kelley’s book Life With Bass, called When Bass Don’t React which was recently posted on the BASS blog. Given when Mike’s fish was caught (June), it would seem that spawning  was most likely the cause of the fish’s lack of fight.

With the fishing being a bit quiet on the coasts, I’ve taken the opportunity to continue my search for estuary marks, encouraged by several reports of big bass caught by anglers fishing for Gilthead bream, and the ban on netting in estuaries . It’s actually rather pleasant, exploring beautiful parts of Cornwall I haven’t seen before. It’s generally a more peaceful way of fishing – unless you happen to come across a swan guarding its nest with a very aggressive hissing!

Why should some bass decide to take up summer residency each year in an estuary system, while others choose the open coast? How much (if any) do they move between the two? I realise these are moot points to my mates on Guernsey – where there are no estuaries!

Angling lore says that bass will move down estuaries on the ebb, hang around at the mouth over low water, and move back up on the flood. But thinking about this, a fish is unlikely to travel the entire length of the estuary (10-20 Km) every tide. The Cork Harbour Study, which used acoustic telemetry to track the summer movements of individual bass, found that within that estuary system, most bass showed very limited movement during their summer residency phase, with 80% of fish spending 90% of their total residency between 2 receivers located <3km apart, with core areas within this range used for resting and foraging.

So it seems that rather than ranging up and down the entire estuary system, fish will choose a small part of it for their summer foraging period, and move within this. I can envisage fish moving up creeks off the main channel with the flood, searching for crabs, prawns, small fish etc as they go, and then moving back down again on the ebb, perhaps feeding in the main channel over low water as they wait for the flood to start again.

Beach angling is an established part of bass angling in Cornwall – with bait. Anglers are now also increasingly targeting bass on the surf beaches with lures, with great success. Anglers like Jamie Strike have become very proficient at this, and shares some great tips in this excellent podcast.

The latest advice from ICES (International Council for the Exploration of the Sea) regarding bass stocks shows that the stock has increased slightly (by 5%), but is still only just above the critical level, and still in need of emergency measures to prevent collapse. Although fishing mortality has reduced, it would take several years (i.e. until beyond 2022) to reach a safe level, even if no fish were caught. Recruitment of fish to the stock has been patchy; there have been some promising year classes (2013, 2014 & 2016), but 2017 and 2019 were only fair or reasonable, and 2018 was a near total failure (according to our juvenile bass surveys in Cornwall), so it’s vital that we look after what juveniles are coming through.

Sea Angling in the UK

The long-awaited report entitled Participation, catches and economic impact of sea anglers resident in the UK in 2016 & 2017 has finally been published. I was one of the anglers who participated in this survey, keeping an online diary, recording activity, catches and spend on a regular basis.

On average 823,000 UK residents went sea angling. The total number of fish caught in 2017 was 54.5 million, with 80% of these being released; 7% of the fish caught were bass. The average total spend per angler in 2017 was £1742. The total economic impact of sea angling was £1.94 billion, supporting around 16,300 jobs. The financial worth of recreational bass angling dwarfs that of commercial fishing for bass, so when is this going to be recognised by fisheries policymakers?

The Benyon Review into Highly Protected Marine Areas   calls for anglers (and others) to be excluded from a number of areas. It was disappointing that anglers were not involved in the preparation of these proposals, and that their activities have been included with trawling, despite the fact that our activities are low impact and highly selective, and that we can act as monitors of compliance with any restrictions.

Adam Duhamel is a Jersey bass angler and MSc student at Bangor University. For his dissertation he is looking at Catch and Release practices in bass angling. Please check this out via this link  and complete the survey if you wish to help.

I bet, like me, when you arrive at your fishing mark you head straight for the water, assuming that any bass will have vacated the rock pools you have to get through to get there, so as not to get stranded by the outgoing tide. I have heard of anglers occasionally disturbing bass as they wade through gullies, but this amazing video from Smash Fishing, where Jay Le Gallic catches an 8lb bass, just sitting in a pool, with a shrimp net  just blew me away! The fact that it’s filmed on Guernsey, my adopted second home, only added to my enjoyment of the video. I wonder how often this happens; was this accidental, or is the fish just resting up in the dark until the tide comes in. It’s interesting that Jay notes how bass aren’t spooked by lights in such situations, but I wonder if this behaviour is influenced by the fact that they are confined within a rockpool?

Thanks to Steve Ainsworth for sending me this link to an awesome video of Grant Woodgate catching 9 double-figure bass on lures, in  just three trips to Portugal.

Several things stuck me about this video – apart from the amazing fishing of course. It shows that big bass can be caught on lures, as well as bait (although I don’t know how many hours he spent on these three trips doing so), and during the day.  Mind you, these were difficult conditions, and I take my hat off to Grant for landing the fish. A word of caution though – fishing in these sorts of conditions, and from this sort of terrain, can be dangerous, so take care if you try something similar – and I’d suggest you wear a life jacket.

That’s all for this month folks. Tightlines, and let’s hope the fishing improves. Keep safe.