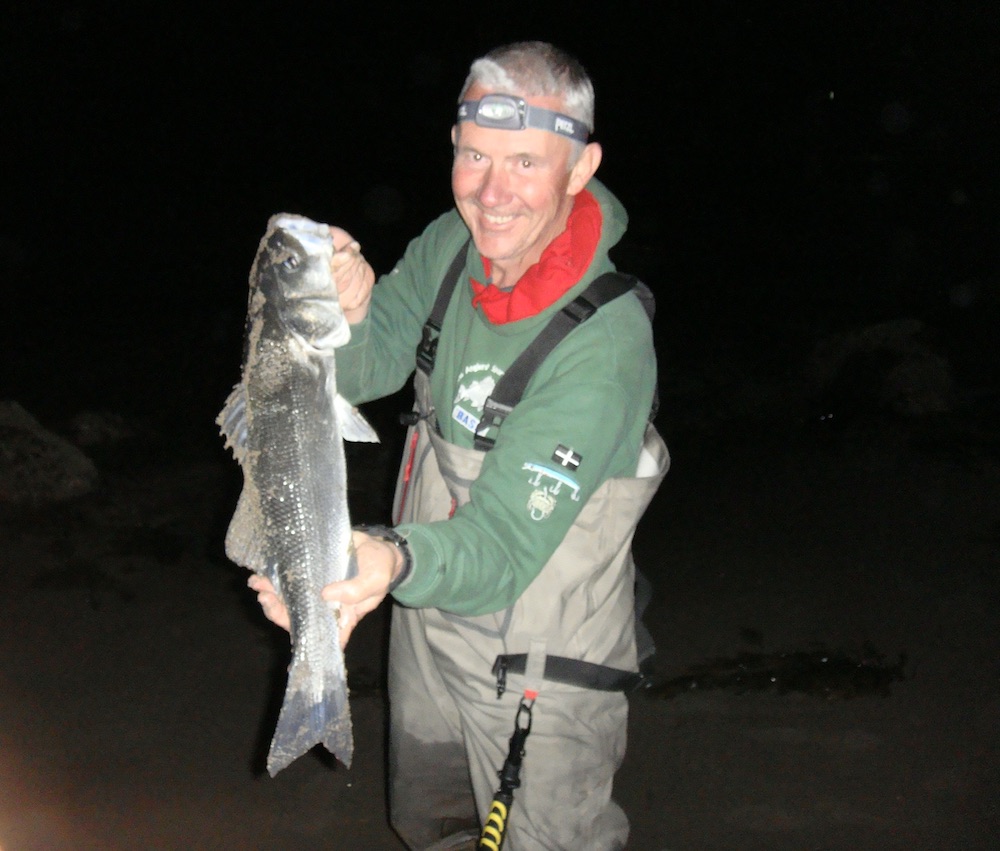 What is it about bass fishing, or any sort of fishing for that matter,  that gives us the feel good factor? For some it’s the capture of a big fish. This is certainly true in my case, although thankfully it’s not the only thing, given the number I catch!

Catching fish of any size is of course enjoyable, but there is so much more to it than that – the pleasure of catching at a new mark, or in a new setting, by a new method, bait or lure; the satisfaction of knowing that you got the conditions right and made the right call. Feeling inspired by beautiful surroundings, and knowing that your body is being physically and emotionally enriched by the experience.  I’ve written about some of the things which have enhanced my feel good factor of late in this month’s blog.

It’s been an interesting experience! At times he hasn’t done my blood pressure any good – he doesn’t get that paddling about in the margins spooks fish, which are often quite close in. Why would he, when we encourage him to do this on beach walks!

His reactions can be quite comical – like the first time he saw me land a bass. He was quivering with excitement, leaping several feet off the ground and snapping at it! A good thing it wasn’t a large fish, or I might have snapped the end of the rod, trying to keep it away from him.

On his first trip in the dark, a big old seal popped its head up, snorting and puffing, about ten yards out. Lookout, I thought, this is going to be interesting. Sure enough Archie proceeded to bark his head off, having been seriously spooked by this monster from the deep!

So far he’s bringing me luck – I haven’t blanked when I’ve taken him on a ‘proper’ session yet. So I’ll just have to put up with his antics until he learns how to be a better bass angler.

This leads me nicely into estuary fishing, which is what I’ve done most of with Archie. Estuaries are the bass fishing final frontier for me – the one shore-fishing setting I needed to crack.

Having now completely cast off (no pun intended) the mindset which says you can’t catch big bass in estuaries, I’ve been spending more and more time exploring them. I’m pleased to say that my efforts have begun to bear fruit, and I’m beginning to get to grips with how to fish them.

Several basic factors seem to be important (I’m sure there are others). Fish will follow the tide, moving up creeks with the flood, dropping back with the ebb and concentrating around low water while they wait for the push to start again.   They move in the channels, where they can be ambushed from a suitable vantage point, before the tide spills out over the mudflats, and the fish disperse .

Bass seem to hug the weed line, and many takes have come by casting my lure to the left or right, and bringing the lure along the edge of the weed, only yards out, or as the lure reaches the weed if casting straight out.

This calls for a stealthy approach, at times even kneeling as you cast and retrieve (plays hell with my knees!). One one occasion, a large bow wave appeared behind my lure just a yard out in very shallow water. Somehow managing to maintain my composure, I held my breath. As the lure almost touched dry land there was a great splash, as a 46cm bass smashed into it. Seeing this at close quarters, only just above the water in my kneeling position, was like nothing I have experienced before.

I always used to wonder what lures to use (or even whether to bait fish) in estuaries, but am now convinced that weedless paddletail soft plastics are the most effective lures of all in this setting. Not only are they deadly fish catchers, they can be brought right through weed, without fear of snagging.

I’ve had good results on the 5″ Keitech Easy Shiner, and the 5″ Fish Arrow Flash J Shad so far. Bass really hit them hard. I’ve not had any big fish on these yet, but most are of reasonable size (between 40 and 50 cm), and are of a similar stamp to those I’m catching on the coast. What the chances of catching a big bass in an estuary are, and whether this is the same as for the coast, only time will tell.

Even if you’re not catching fish, the beauty and tranquility of the surroundings more than makes up for it. If you let your mind wander, you could be fishing for salmon in a Scottish river; quite a change for a coast angler like me.

Most of the fish I have caught have come in daylight – a treat in itself. Fishing at night in estuaries, especially where there’s no moon, and there’s not a breath of wind is another experience altogether.  The water’s like glass, and you can hear your lure land somewhere out there. As you stand there, a huge splash along the shoreline, only yards out, gets your pulse racing. The answering cast is met with indifference. But then, unknown to you, a fish follows your lure in and  lunges at it at your feet. The resulting commotion, like someone had thrown a great rock in the water, makes you nearly jump out of your skin!

The fishing around the equinox (22nd September) was phenomenal, with some very good bass being caught at that time – one to note for next year.  I had one or two notable sessions leading up to this, but  was caught up in various family visits and trips around that time and the period just after.

One such session involved fishing a new mark with Keith Towsey and Mike Bryant at the ‘magic beach’.  We each headed off in different directions to check out the ground.  It wasn’t long before I was getting some action on surface lures. I’d had two definite slashes at the Yozuri Arms Pencil (YAP – now sold as the Duel Silver Dog 90 – if you can get them), but no hook-ups. Was this small fish missing the size 1 VMC barbless singles I had fitted, or were the fish feeling lethargic on the neap tide? A switch to a more exaggerated ‘walk-the-dog’ style retrieve seemed to gee the fish up, and a solid hit from a nice 61cm fish soon followed.

As darkness fell, the fish seemed to disappear, so it was time for a move along the rocks, and a change to soft plastics. I’ve found that paddletails work better with my retrieve style on neap tides, so on went the Swimsenko – bass of  43 and 44cm seemed to justify this.

A few days later I was keen to try the mark again. This time we were fishing in calm conditions on a bright moonlit night. To cut a long story short, we managed a few between us to 51cm (Keith) on white or cream coloured SP’s (DoLive/Senko/Swimsenko/Gravity Stick), but the interesting thing happened when I switched to an Arms Pencil.

I rarely use surface lures at night these days, but my recent success on the YAP, and a Facebook post from Marcin Kantor about this, plus a lack of action on SP’s, prompted me to try. First cast the lure was hit, virtually as soon as I started retrieving. It was a good fish too. I had to perform some acrobatics, clambering over rocks while trying to maintain contact with the fish, and I thought I had her beaten……..you probably know how that one ended!

It’s tempting to think the fish was on/near the surface, and saw the lure silhouetted against the moonlit sky, but who knows.I’ll certainly be taking a surface lure when I fish in these conditions again.

Angling buddy Paul Wallace had a bass of 5lb 13oz on squid recently.  As Paul said in his text message, bass have something magical which makes us keep coming back for more, through the blanks to catch a beautiful fish like that. Well done Paul.

I’ve been interested in the management of the bass fishery and campaigning for better stocks for as long as I can remember. As part of this I have regularly attended Cornwall Inshore Fisheries and Conservation Authority’s  quarterly meetings, observing from the public gallery and submitting the occasional written question.

When I saw an advert for new general members, including people with a background in recreational sea angling, to join IFCAs, I did a bit of soul searching. Could I do the role justice? Could I spare the time? Was I ready for the, no doubt, significant challenges involves? After a good deal of thought, I decided to go for it; time to roll up the sleeves and do my bit, I thought.

Well I’m pleased to say that my application was successful, and my first meeting will be on December 17th. I’m looking forward to working with the committee, and doing what I can to help. I hope that my knowledge and experience of recreational sea angling can help CIFCA meet its commitment to the sustainable use of marine resources and balancing the needs of all who use them.

Our programme of juvenile bass surveys has now ended for this year. It’s been a steep learning curve for me, taking over from Derek Goodwin. Thanks to our brilliant volunteers, we’ve had quite a successful year. We carried out 16 surveys, including trialling several new sites (on the Fal and the Camel).

Based on the number of last year’s fish we found in our  surveys in May and June, we conclude that the 2020 class is a reasonable one, and has survived its first winter well.

The picture for 2021 is harder to assess. A series of disappointing catches of this year’s fish was turned on its head by one very good result on the Fal.  It’s probably better to reserve any judgements about the 2021 class until we have conducted our surveys next year, when these fish have reached 1 year old.

I can’t close without mentioning Derek’s MBE investiture. I was honoured to be invited to attend the ceremony at County Hall in Truro, with Colonel Edward Bolitho, Lord-Lieutenant of Cornwall, doing the presentation. Very well done to  Derek. This is a much-deserved honour and validation of the importance of this work on juvenile bass populations over many years.