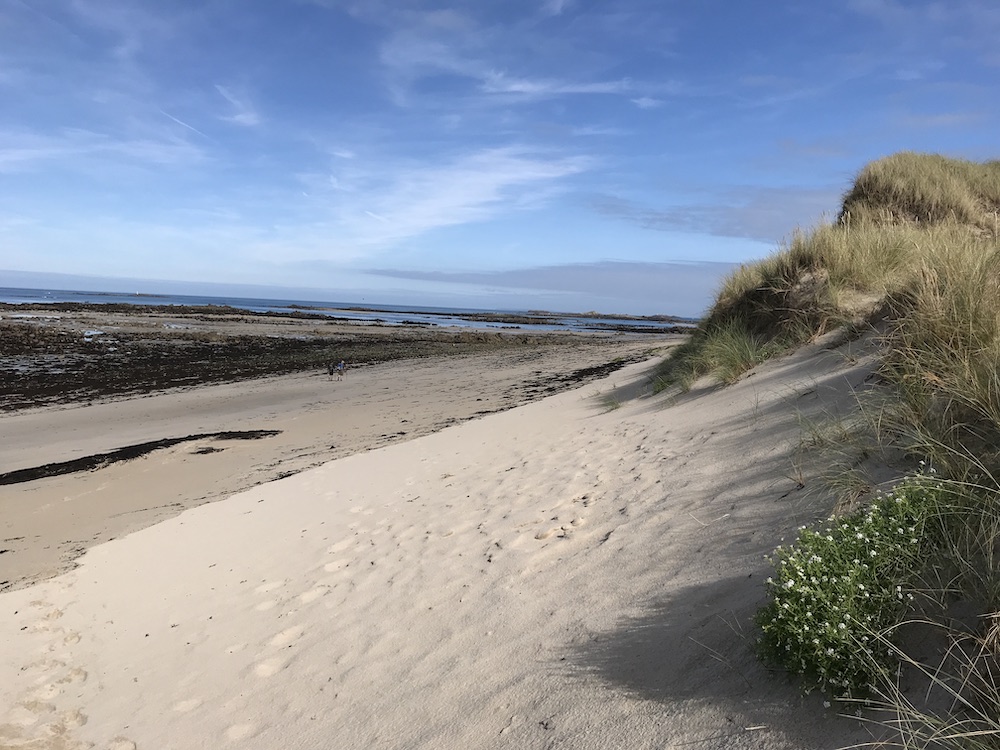 I’ve just returned from a long weekend fishing with the guys from GBASS  and friends, bass fishing on the magical island of Herm.

You’ll understand what a special place this is, and what a great bunch of guys these are, when I tell you that even though the bass fishing was the worst they’ve known, I can’t wait to meet up with them over there again. I can’t thank the guys enough for making me feel so welcome, and being such great company.

My visit had started with a couple of days enjoying the warm hospitality of Bryn and Emma Le Poidevin at ‘La Boulangerie’, their lovely Guernsey cottage. Of course it would have been rude not to sample the steak and local Breda beer at ‘The Driftwood’, while catching up on the Guernsey bass scene on the first evening. Apparently Breda has been the undoing of many an unwary visitor, but I have to report that all was (sort of) well – even after a Pastis chaser back at Bryn’s.

Thursday saw us stocking up on food supplies (including the legendary Perelle ‘sizzler’ sausages) for the weekend, before meeting up with Dave and Nigel du Jardin for a verm digging session. Verm  formed the mainstay of our bait fishing. Collecting it is no easy task, and requires both skill and stamina in equal measures.

Friday morning saw us making the short trip over to Herm. I had to pinch myself as the ferry pulled into the tiny harbour, with the sunshine showing off the island in all its glory. Was I really about to spend three days and nights bass fishing in paradise, with some excellent bass anglers. I reflected on how fate had brought me to this part of the world, when my son came to work on Guernsey as a surgeon some four years earlier.

It was nice not to have to think about where to fish – these guys know the island well, and are more than happy to show you around. Just as well, given the speed the tide can come in on the big springs like we had this weekend. I vividly recall standing in the dark and feeling the coldness of the water moving up the outside of my waders from ankle to knee in the time it takes to make just a few casts.

You can tell how special the place is to the guys, who are keen to show off its many features and its rich sealife.

As I mentioned above, the fishing could have been better, but it’s funny how it almost doesn’t matter whether you catch or not in these circumstances. Every session starts with hope, and every cast brings with it an anticipation of your bait or lure being snatched, whether or not it actually happens .

But one bite for Dave turned into something special when he landed a stingray after quite a battle (we thought he had hooked the Herm ferry at one point!). The fish was estimated at 15lb, although no one was keen to weigh it, in view of the nasty wounds they can inflict with the long spine on their tail.

We did catch bass, albeit mostly of modest size, except for Dean’s near 6lber.

My own best effort  was a 53cm bass caught on a watermelon and pearl 6″ Hawg Senko, just before first light while under the excellent guidance of top GBASS rod Simon De La Mare. Although this fish was of modest size, catching it crowned a moment that will stay with me for years to come. Here I was, fishing a sandy bay somewhere off the Normandy coast on a beautiful island as the dawn approached – priceless! A little later, a move to a nearby causeway produced a feisty 50cm bass, just to cap things off.

Each session saw a different facet of the island, with its massive tides (up to 10m) stripping out to reveal inter-tidal reefs stocked with copious amounts of food for bass and other species, or its gorgeous sandy beaches.

Fishing by day, in the sort of weather we had (amazing to be fishing in shorts and sandals in the middle of October), brings views of neighbouring islands like Sark.

By night the lights of Guernsey across the water seem dazzlingly bright in contrast to the dark skies of Herm. Wending your way to your next fishing session along the dusty spine road, where only people, cows and the occasional quad bike ferrying stuff around are allowed to pass, and hearing the hum of the island’s only electricity generator as you go, reminds you how unspoilt this place is. And instead of that, sometimes long, drive home, it was shanks’ pony back to our holiday cottage for a whisky nightcap (or several) with the boys.

Fishing is about more than just catching fish. It was the reason why I was there, but just being in such a fabulous place, with people who have become good friends, was a far greater reward.

Dave du Jardin, the Steven Spielberg of the bass fishing world (aka Mr Stingray) produced this brilliant video in his own inimitable style which nicely captures the essence of the trip; enjoy…….