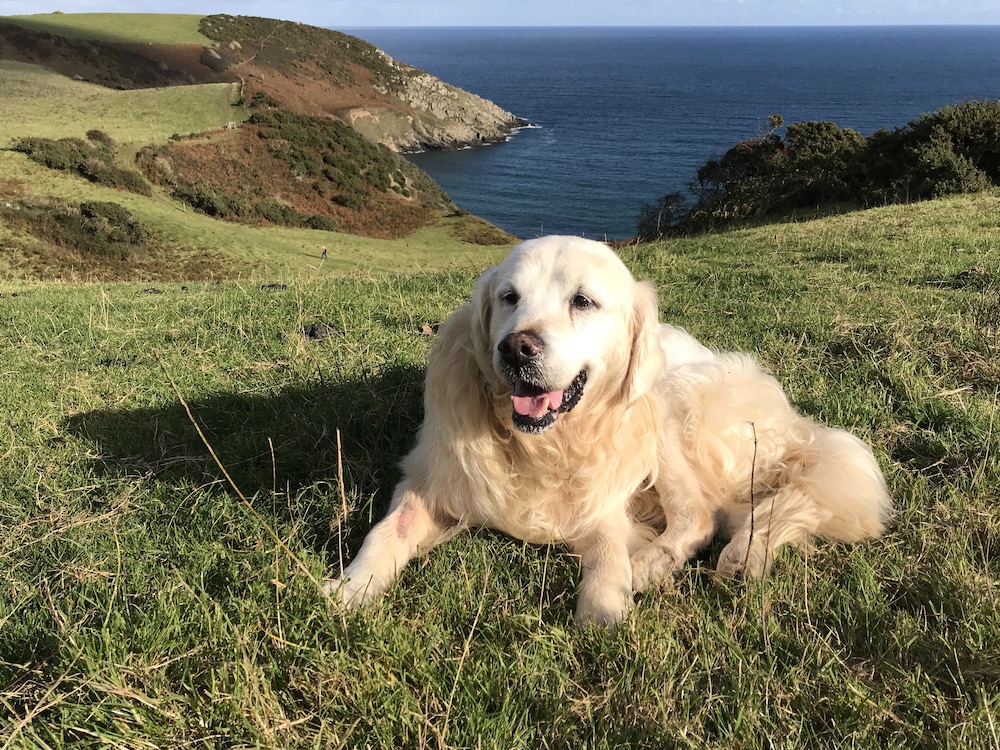 Any dog lover who’s lost one will know the pain this brings. And so it is with Toby, our wonderful golden retriever. After 15 years, we’ve had to say farewell to him.  He battled on with great stoicism, but in the end it was just too much for him. A true friend and much-loved member of the family, he will be sadly missed.

I can still recall the night my son stood on our doorstep with this bundle of golden cuteness in his arms.

Ben had collected Toby (registered name Kadaka Caricolake) from a breeder in Ivybridge on his way home for Christmas. He knew that we were missing our first retriever, Bouncer, and wanted to show his appreciation for helping him get through medical school. It was a wonderful surprise, and what a present Toby turned out to be – not just a pet who gave us so much pleasure and love, but the embodiment of what Ben had achieved, and his appreciation of our support.

Like all puppies, Toby was a proper mischief maker, with a taste for carpet tiles and underlay! On his first trip to what turned out to be his favourite beach (Carne – on the Roseland peninsula in Cornwall), the little monkey got under an elderly gentleman’s feet, and nearly caused him to have a serious mishap – much to his displeasure!

People often ask when retrievers settle down – well from our experience it’s not until they get to about two. In the meantime be prepared for lots of naughtiness – including running off and jumping in someone else’s car boot!

With Ben and Sarah having left home, Toby helped to fill the gap they left, and became so much a part of mine and Angela’s lives. Like most retrievers, Toby was an outdoor dog. He was never happier than when on the beach, or walking through the woods or along the coast path.  In these, him and I had a shared passion, and the bond between us grew stronger and stronger, particularly without the constraints of work after I retired in 2013. We’d had family pets before, which of course were much-loved, but my friendship with Toby was somehow closer, and he became ‘my dog’, as Angela would say. Toby was always great company, and as good as gold (most of the time!). The unconditional love which dogs give makes you feel so good. He always had a cheerful, waggy greeting, bringing me his favourite toy when I got home,  putting a smile on my face and easing the problems of a day at work. He asked for nothing, save for food, drink and shelter, and gave everything, without complaint. He was a healing dog too, and I will forever remember how he helped me recover from a breakdown in 2012.

I started taking Toby fishing quite early on. It took him a little while to realise that I wasn’t casting lures out for him to retrieve, and that splashing around in the shallows doesn’t exactly help the fishing, but he got there. He used to get impatient, and if I wasn’t catching he would run over to my fishing partner and see how they were doing.

We had many fishing exploits together, and those who have fished with me, or read my book, will know that he became a bit of a fishing legend. He was the perfect fishing partner – he always wanted to go, never minded where to, and never gave marks away!

He always knew when a fishing trip was on, and if I didn’t take him he would sulk until I got home, taking himself upstairs and laying on some article of clothing with my scent on it.

Toby didn’t believe in catch and release. On one occasion, I landed a bass, measured it, and took a few scales from it, before returning it to the water. As I did so, Toby pushed past me, and made a grab for the fish; he often does this, but usually they are much too quick for him!

On this occasion however, he was successful, and his head popped up with the bass hanging from his mouth – he looked very pleased with himself! I shouted at him to leave the fish, but he was having none of it, and promptly ran off up the beach.

I chased him, and was about to give up, when he placed it, ever so gently, on the sand. To my great surprise, the fish was still alive, and had not a mark on its body. Wasting no time, I took the fish back to the water and slipped it in for a second time, holding his Lordship off; amazingly it swam off, seemingly none the worse for its doggy encounter with the terrestrial world!

I have so many wonderful memories of Toby. Take the day Toby was runner-up in the ‘most handsome dog’ contest at the Trewithen Country and Classics show in 2013. I have never entered Toby in anything, either before or since this. So many people said what a beautiful dog he was over the years (and did so until he died), so I couldn’t resist entering him, and it was all done in a spirit of fun in any case. When he was awarded second prize, I was as pleased as any ‘dad’ could be, and proudly walked him round to show off his posh rosette.

It was so hard to let Toby go, but he had a good, long life, and we were blessed that he spent it with us. He will be greatly missed, and leave a gaping hole in our lives. Our lovely boy will always be in our hearts, and will never be replaced.