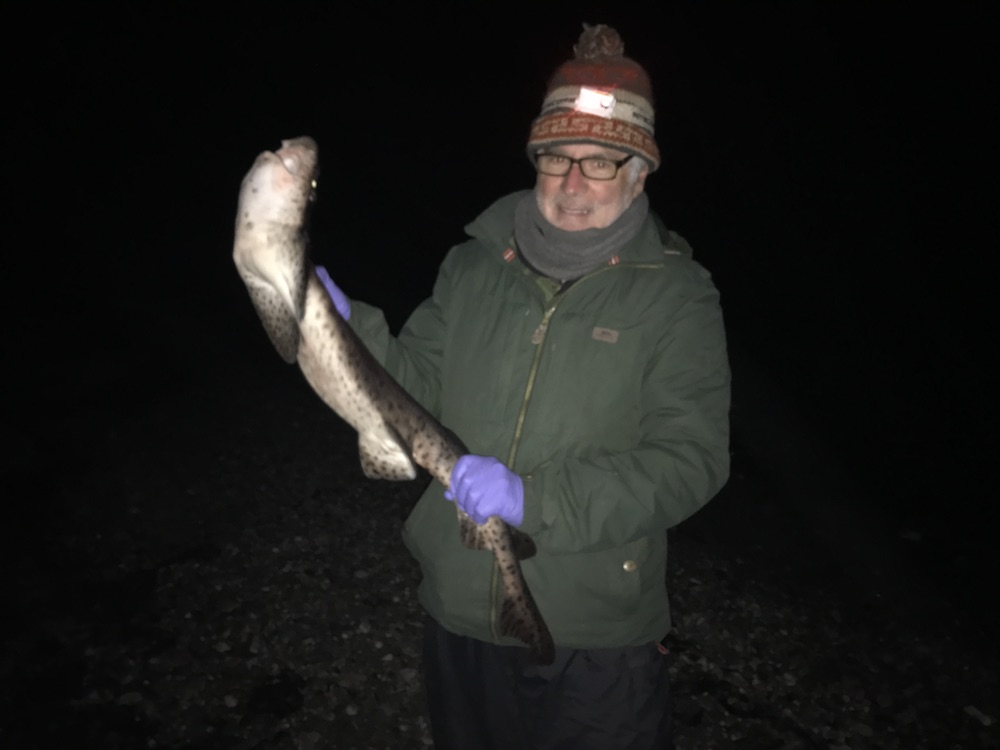 “If only it was a bass” (or words to that effect!), said Richard, as he landed a dirty great huss. We’d been fishing a mark which has produced some of my best bass over the years and when he felt the bite, and with the ensuing struggle to get the fish in, Richard was hopeful of a lunker. I could hear his voice going up a notch, as he brought it in; “this feels like a good fish”, and then “this feels like a very good fish”, only for his hopes to be dashed as this evil-looking black thing came ashore.

I don’t wish to be disparaging of those who actually target huss, and no doubt would enjoy catching one the size of Richard’s (10lb+??), but if you’re after bass they’re about as welcome as a dose of venereal disease.

Only the night before, I had the same experience at another mark. Unlike Richard who had squid on, I was using peeler shore crab for bait. I had recently landed a bass of 46cm, so when the rod went in my hands again I was hopeful of another. It was a funny sort of bite though, and when it didn’t develop I assumed the fishy enquirer had moved on to other things. As I began the retrieve, it was as if the line was stuck. There was just enough give to make me think I had caught weed on the bottom. Another yank, and the line seemed to come free. “At least I’ve got my gear back” I thought.

It was at that point that I began to feel movement. “This feels like a fish” I thought, and as I slowly brought my line in I was aware of a heavy weight. “Christ”, “if this is a bass, it’s a good one – maybe a double?” You can imagine my feelings of unbridled joy then, when a huss at least the size of Richard’s appeared; I really shouldn’t use such language in front of  an innocent creature!

I guess that’s the downside of using bait in the shallow rocky areas that these ‘catsharks’ like to inhabit. Not all areas are blessed in this way – this doesn’t seem to be a problem in Dorset for example. And maybe their presence reflects an absence of bass, since these superb predators leave huss standing when it comes to getting food.

Of course one way to avoid such ‘bycatch’ is to use lures –  I’ve yet to see a huss taken on a lure! Mind you, lures have their own ‘bycatch’ when targeting bass – mackerel, pollack, garfish and wrasse for example, can all be taken on lures. Some would consider this an advantage, and there are times when a mackerel or two are nice for tea, or come in handy for bait. I can’t recall catching anything other than bass on lures at night, so maybe this is the way to go if you want to totally exclude catching anything other than bass.

I’m not talking about your bait being ripped to shreds by crabs before your intended target can get to it, but about getting hold of them in the first place. I have laid traps for shore crabs in a local estuary.

I used to be able to collect enough for several fishing trips in one go, but now I seem to struggle to get even single figures on many occasions. Each time I look in the bucket, wondering if it’s worth the effort, I just assume this is due to the vagaries of the weather, or the season (or unwanted attention from other bait collectors!).

But it seems I’m not the only one who’s struggling to collect shore crabs in estuaries. One commercial crab collector I know, who keeps very comprehensive records, has noticed a definite reduction in numbers too.

It’s unclear why this should be. Could it be something to do with the availability of the crabs’ food caused by global warming, or perhaps some change in water quality?

It seems that the numbers of the  furrowed crab are on the increase on the coast, and that they may be pushing shore crabs out (with thanks to Cornwall Wildlife Trust), but whether this is having an impact in estuaries is unclear – I can’t recall seeing a furrowed crab in an estuary.

Whether this change will affect bass in any way remains to be seen. They seem to switch onto feeding on whatever’s about in numbers at the time, and presumably they will devour a furrowed crab just as eagerly as a shore crab!

Hardly a day goes by without reading about large numbers of tuna being seen around Cornwall. These are an impressive sight, but I can’t help wondering if they are having an effect on bass, and other species; whenever the ecological balance is changed  there is usually some sort of knock-on effect.

A recent article in The Independent looks at the possible reasons for the reappearance of bluefin tuna in big numbers after over 60 years. It suggests this may be due to the influence of ‘Atlantic Mulitidecadal Oscillation’, a 60 – 120 year cycle which brings warmer waters further north.

Reports of bass catches seem to be slowing down now. My own catches have been somewhat disappointing. But I’ve enjoyed being able to go off fishing with my canine companion Archie during the autumn afternoons – one of the perks of retirement; catching fish seems almost incidental in such situations.

I’ve been continuing my estuary-fishing journey, with a modicum of success. This 60cm bass fell to a 5″ Fish Arrow Flash J Shad.

I’d like to thank fellow BASS member Ian Sefton for sharing his extensive experience and knowledge of estuary fishing for bass.

That’s all for this month folks. Many thanks for reading the blog this year. If you are looking for something to read during the long fishingless winter nights and weekends, why not ask Santa for a copy of my book? You can see an electronic preview of it here.

Hope you’ve had some good fishing this year, and next will be even better for you. Wishing you all a merry Christmas and Happy New Year.