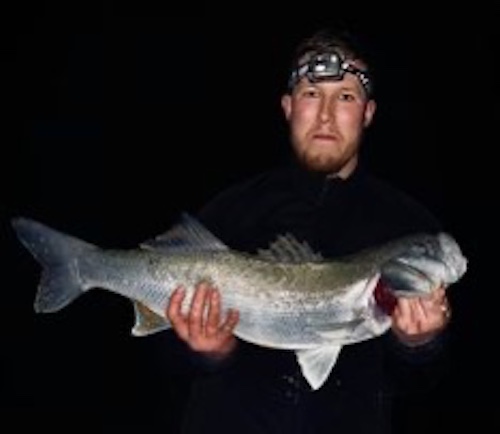 My buildup for the bass fishing season ahead was given a sudden boost by news of Cornwall angler Jordan Griffiths’ superb 10lb 5oz bass, which can be seen in the featured image above.

What a fantastic achievement by Jordan, who’s not been fishing long. “After a year and half of fishing can say I’ve caught a fish that I will possibly never beat, I’m over the moon!! ” There’s many an angler (myself included) who have yet to land the magic ‘double’ after fishing a lot longer than that, so well done Jordan.

He caught the fish on bait – squid and cart. If, like me, you’re unfamiliar with ‘cart’,  it’s made from the insides of a brown crab.  Jordan cuts open the squid, puts a small amount of cart inside the squid, and binds it together with bait elastic.

Jordan’s is not the first big bass I’ve heard of being caught at this time of year in Cornwall, but they’re not exactly commonplace. These fish are probably making their way back to their summer feeding grounds. Some may not have spawned yet, and a bass the size of Jordan’s could contain around 2 million eggs, so well done to Jordan for returning her to the sea.

Great to be by the sea again

Over the last few weeks I’ve been getting ready for the coming season – checking out rods and reels, topping up on bits of tackle etc, in anticipation of the ‘stay at home’ Covid requirement coming to an end on March 29th.

The day itself coincided with some very big tides, so some razor collecting was on the cards. If you’ve never done this, have a go – it’s great fun, and they make superb bass bait (and eating – apparently).

It was wonderful, driving to the coast and being by the sea again, especially on such a beautiful spring day; a real tonic for lockdown blues. I used to be able to collect enough razors for the season in one go, but not now. So I was off again the next day, to another venue. I should have enough to last a while now, and there’s another set of suitable tides for collecting at the end of this month.

While in bait collecting mode, I decided to check my crab traps out. This was mainly to clear them out, after silting up over the winter, so I was pleasantly surprised to see that the spring peel had already started. And I landed a schoolie on one the other night – my first bass of the year.

A recent news item from the Angling Trust contained a reference to a paper entitled “Can fish really feel pain”, which concludes “fishes are unlikely to experience pain”. Not long after this, I watched the “Seaspiracy” film (more about this later) which also raises this subject. Wanting to know more about this difficult and controversial subject, I did a literature search.  I found this more recent paper (among others) entitled “Evolution of nociception and pain: evidence from fish models”, which concludes that “it is highly likely that fish experience pain”. So there seems to be conflicting messages out there, and the fact is that it is impossible to provide a definitive answer to this question, since fish are unable to communicate directly with us.

If we accept that fish may have the hardware to experience pain, does this mean they actually feel it, in relation to angling activities? It’s not as simple as yes or no  – different parts of the body may have different pain thresholds. Being able to feel pain is held out as a good adaptation, which allows animals to avoid injury. But what if this were to put a fish at a disadvantage? Fish eat all manner of spikey objects, and if they felt pain in their mouth this would surely discourage them from doing so, potentially leading to starvation.

I well remember hooking a good fish, only to lose it in a snag. A little later, my fishing partner hooked, and landed a bass of about 5lb – with my hook and elastic band in it’s throat! Clearly this fish had not been put off by its encounter with my hook, and me pulling for a break.

No doubt the debate will rumble on…………

This Netflix film is quite a difficult watch in parts. One of the standout features is the damage being done to the planet by commercial fishing. Equally disturbing is the apparently passive acceptance of this by some marine conservation groups. I experienced this myself, when raising concerns about immature bass being caught in gill nets with too small a mesh size.

Another excellent article from Alan Bulmer “How fish use their later line” contains some useful lessons for the lure angler.

A fish’s lateral line senses pressure waves, but it seems that this is only efficient over short distances (less than one body length). “Experiments have also shown that fish rely on sound and sight to detect prey and approach it whereas the final strike and catching of the prey is mostly based on the lateral line.” “When the water clarity is poor, or in low light, the importance of the lateral line in locating prey becomes critical.” So presumably your lure needs to be passing quite close to a fish for it to be detected in the dark, or in coloured water, since sight is much reduced and sound pressure waves cannot be perceived by the lateral line.

“Torpedo and arrow body shapes give off less pronounced oscillations when moving through the water than sinuous eel like shapes.” Does this mean that soft plastics catch more bass at night? But that’s presumably not taking into account the good vibrations that many plugs give off. I’ve caught bass on both in the dark, although I tend to use soft plastics more now – mainly because I don’t have to worry about snags so much.

“Changing treble hooks for singles, replacing split rings or increasing the gauge of hooks used could completely change the pressure wave “fingerprint” and attractiveness of a particular lure.” I change the trebles on all my plugs to singles, and I’ve not noticed any effect on catches yet, other than perhaps losing the odd schoolie. I think it helps to get the weight of the singles + split rings as close as possible to the  original trebles + split rings, at least for shallow-diving plugs.

That’s it for this month folks. Tightlines to you all, and let’s hope one of those big girls come your way.