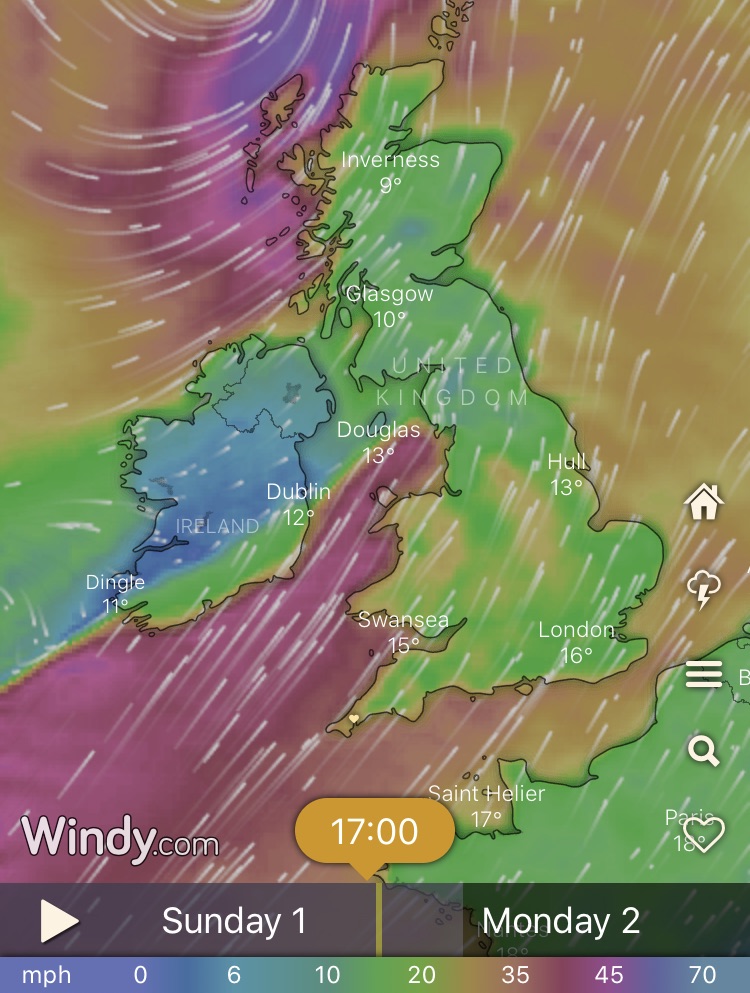 I don’t know about you, but 2020 is turning out to be a bass fishing disaster for me. The weather seems to have been even more unfriendly than usual this autumn, severely cramping my style just when I usually catch my best fish of the year. Let’s hope the current quiet spell of weather lasts, although the fish seem to have disappeared from my marks at the moment. I’ve even managed to break a favourite rod wrestling with a pile of weed!

And like many others this year, my fishing opportunities have been very disrupted. What with the late start due to the first coronavirus lockdown,  a good chunk of time away visiting family during the summer Covid window, the recent passing of Toby, and of course the bad weather, trips have been fewer than in normal years. And just to cap it off,  the chances of catching that lunker seem much reduced this year, with few big bass being caught so far in Cornwall.

And with the Angling Trust advising us to fish locally during this second lockdown, some of my big fish marks will be inaccessible to me for at least the next month. But it’s great that we can fish, and we are indebted to the Angling Trust for facilitating this.

It’s blowing a gale out there!

Over the years I’ve tried to give myself as many options as possible in the event of stormy weather. There’s usually somewhere I can fish, especially now that I’m increasingly turning to estuaries. Yet even these are not completely protected from the strong winds from the west or southwest we get at this time of year. Sure, you don’t get the huge waves you do on the coasts, but casting into headwinds is still a problem, and the leaf and other debris which these autumnal winds bring can also be challenging.  If any inspiration was needed to fish in estuaries, have a look at this amazing video which James Lean sent me.

Even if you can find a relatively sheltered spot on the coast, there’s often still a deflected swell present.  I suspect this puts bass off feeding over very rough ground. You may still catch them on sandy beaches, but even here the fish may be well out to sea in very rough weather. Either that, or some may seek the relative shelter of estuaries, so if you can find somewhere out of the wind it could be worth trying these.

In any event, safety is the overriding consideration, and I certainly would NOT go near the coast In conditions like we’ve had recently, which have sadly claimed lives.

Where have all the bass gone?

For bass anglers in some parts of the Country, the bass fishing season has already come to a close. For others, like me living in Cornwall, there’s a good chance of catching a bass or two, including some decent ones, right up to the end of January. Yet even here you could be forgiven for thinking that the season is over, going by the poor catches of late.

This is a familiar conundrum – have the fish been hammered by the commercials, or is there a more natural cause? Are the fish offshore chasing herrings etc? Have they been predated upon by the increasing number of seals? A grey seal needs about 11lb of food per day on average. They feed on various species of fish, and on sandeels, but they are not averse to the odd octopus (and presumably squid and cuttle) and even lobsters, so they are not entirely dependent on fish. Mind you, just the other day, a young seal popped up with a bass in its mouth while I was fishing, as if to say “this is how it’s done mate!” Note that they don’t feed every day though, and during the breeding season (August to December in Cornwall) they may not feed for prolonged periods. The increasing numbers of tuna which are coming to our coasts, presumably following the baitfish, may well be having an effect on the local bass populations (either by displacement or predation).

One further explanation for the absence (or presence) of fish may be the migration of bass. They move south and west in the autumn, heading for overwintering and pre-spawning areas in the western English Channel. There’s a good chance that the fish in your area will already be on the move by now.

Depending on where you fish, this can either signal the end of your bass fishing season, or a temporary pause until migrating fish from areas further north or east make their way past your shores.

In Cornwall, the ‘local’ or ‘resident’ fish stocks seem to be boosted by the arrival of the first main run of migrating fish towards the end of October, potentially giving some very good fishing. Depending on the level of stocks in general, both numbers and size of fish may be increased.

Like most things in nature, the timing of these events may vary, and it may be that there is a gap between the local fish departing and the migrating ones arriving, giving one possible reason why catches are poor when we are expecting them to be good. Have recent storms disrupted their usual migration patterns?  All this just serves to illustrate that sea anglers are fishing in a highly dynamic situation.

The last good session I had was in the SE’lies in mid October, where I had 8+ fish (but biggest only about 3lb) on lures. The day after this I lost a real bruiser, while fishing with crab in rough conditions. The fish was really thumping as I brought her in. I had to negotiate my way down some rocks, using one hand to steady myself, while she tore off to the right. As if this wasn’t enough, I had to contend with some quite big wave surges. Just when I thought she was nearly home and dry, everything went slack! Since then the fishing’s been poor, and the frustration of that moment is being reinforced on a regular basis!

Do you only catch bass?

My brother Nick asked me the other day if I only catch bass. I have been asked this question a few times before, or variations of it, such as “how do you know you’re just going to catch bass?”

The answer, of course, is that we don’t. Depending on what’s about, or the way we fish, we might catch a few garfish, pollack, wrasse or even the occasional sea trout when lure fishing, or wrasse (in the day), dogfish/huss, rockling, conger or ray when legering.

And yet, despite these ‘bycatches’, most of the time I catch mainly bass. If I wanted to restrict these bycatches further, I guess I would limit myself to lure fishing at night, but even then the occasional pollack might show its hand.

Catching big bass in the daytime

Bass fishing has always been thought to be better in the dark. When lure fishing first became popular, anglers realised that good catches of bass could be made in daylight, but this tended to be in the summer evenings or early mornings.

On several occasions, I  have encountered (but lost) seriously large bass during the daytime. I’m talking about the middle of the day, usually when I’ve only been fishing because I was on a fishing holiday, or fishing a competition, and I might as well go, as sit around twiddling my thumbs.

What brought this topic to mind was a recent article in Sea Angler magazine, describing Don Cook’s capture of his 17lb bass, a new Welsh record, in 1980. Fishing was just an afterthought, since Don’s main intention was to collect crabs for an evening session; he stuck his fishing gear in the car just on the off chance – good thing he did!

The question is, are these just flukes, or should we target the bigger fish during the middle of the day? Well, it makes you think – must be worth a try. About the only common denominator is that these fish were hooked in rough ground, so that’s where I would focus my efforts.

The Bass Anglers’ Sportfishing Society have a great blog. A recent post serves as a useful reminder about not overcasting for bass, fishing in calm conditions and how good mackerel is as bait. The article describes big bass (8-12lb) being caught just one to two rod lengths out.

For sea anglers it can be very hard to convince yourself that bass will come in this close. To my good friend Richard Brandon, with his pike and carp fishing background, this comes naturally. His results, with several good bass taken while legering with squid/razor close in, have convinced me it works. For example, this one took a whole squid just 3 rod lengths out in a heavy sea. It’s not just bait fishing that can work with a close-in approach. This video from Marcin Kantor shows how this can work for lure fishing as well. As Marcin says “fish the water’s edge and fish the features”. Casting in the open water will catch bass, but this is more dependent on coincidence, with the fish just happening to encounter your lure as it passes by.

Have you ever gone back to a mark the day after a blinding session, only to blank? I certainly have. There are many things that might explain this, but Alan Bulmer suggests in this article  on the excellent Active Angling New Zealand website, that fish digestion may play a particularly important role.

A sudden glut of food items may lead to fish gorging themselves to the extent that they may not feed for days afterwards. The length of time may depend on how long it takes the food to be digested, which in turn depends on the size of fish, the amount eaten and the water temperature. Furthermore, a change in water temperature, away from that which is optimal for digestion in any given species, can have a marked effect on food digestion times, going from hours to days, even to weeks.

Keeping an eye on sea temperatures is an important part of our bass fishing. I measure the water temperature where I am fishing on an ad hoc basis, and this usually ties in well with figures from well known websites. The sea temperature in Cornwall typically ranges from 9-16C over the course of the year, so even without knowing what the optimum temperature is for food digestion in bass, you can see how this could affect their feeding throughout the seasons. In estuaries this fluctuation in water temperature is likely to be even greater.

Our bass survey programme this year has been very disrupted by Covid. We didn’t manage any ‘1’ group surveys at all, and the 0′ group surveys were limited to shore-based ones only – some of these on a trial basis. The few surveys we did manage to carry out were disappointing, in terms of numbers of ‘0’ groups, but it’s difficult to draw any definite conclusions about the strength of the 2020 class on the basis of such limited data.

Here’s a short description of this work.

That’s it for this month folks. If your season is over, I hope you’ve had a good one. If not, I hope the remainder sees you landing that new PB.