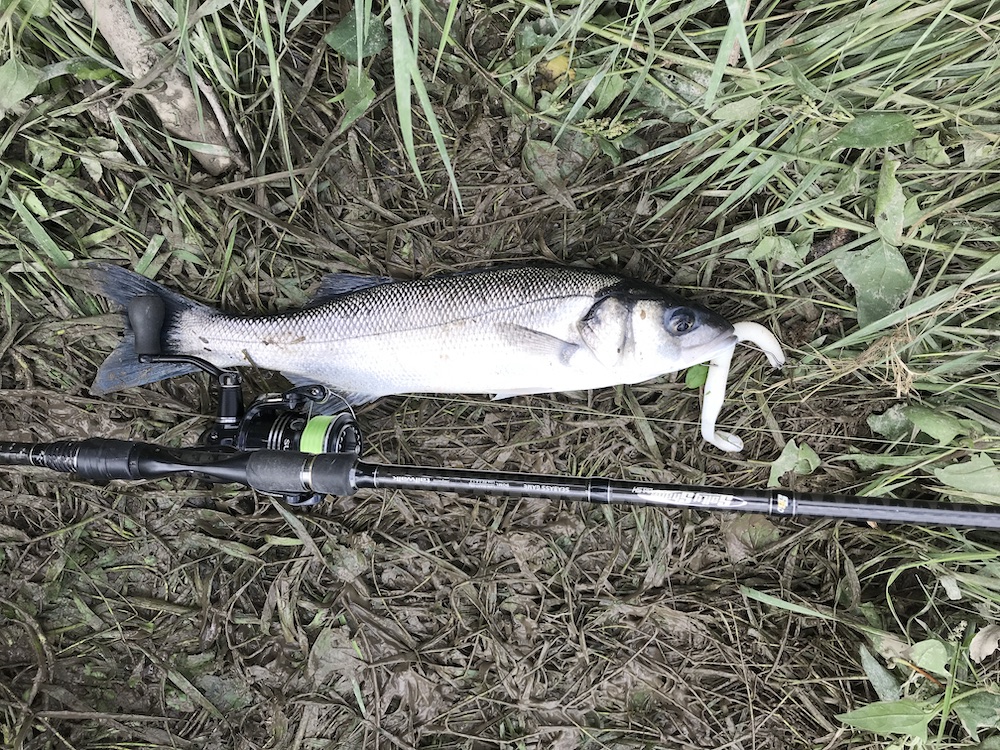 I used to think that you only caught schoolies when bass fishing in estuaries. It is a fact that most bass spend the early years (up to aged 4) in such areas, so these juvenile fish will predominate, but I’m now convinced that some adult bass (including some big ones) spend their summer and autumn in estuaries, and probably return to the same ones each year.

And why wouldn’t they – with an ample supply of prawns, crabs, worms and all manner of small fish, not to mention the shoals of mackerel when they come in. Of course they have competitors, such as gilt-head bream, and predators, such as seals and possibly dolphins, maybe even tuna at times, but at least they escape the nets (in Cornwall at least – where the River and Estuarine Fishing Nets Byelaw now prohibit the legal use of these).

This new-found confidence in estuaries comes from scientific research – like this study in Cork Harbour in Ireland, from increasing reports of anglers catching good bass while fishing for gilts, and reports of big bass being caught on lures.  It’s making me explore whole new areas, in pursuit of catching a big bass in quiet conditions, away from the big seas on the coast, in tranquil and leafy (creepy at night if you’re on your own!) surroundings.

You can imagine the pleasure it gave me then, when I landed this 60cm bass a few weeks ago while fishing at one of angling friend Stuart Martinez’ marks. Not only was this my first half-decent bass caught in an estuary, it was taken on a Dark Sleeper lure, which I wrote about in a blog last year.

Get the fork out

With reports of big bass caught in estuaries while bait fishing for gilts, I thought it was time to get the fork out. It’s been a while since I used lug, let alone dug for it, so I wasn’t sure if my old spot still produced, or if I still had the knack of getting them. Undaunted, off I went, wielding my fork and with an expectant bucket in hand.

It was a pity I chose one of the hottest days of the year to date! This, and the fact that I had been fishing late the night before, severely affecting my stamina reserves, did nothing for my resolve. Although there were plenty of casts to be seen, the little buggers didn’t want to come out to adorn my hook – most inconsiderate of them I feel! I did manage a few though (including some quite nice ones) before I sloped off the job, drenched in sweat! (bait diggers have my total respect).

Alas, apart from a couple of schoolie rattles, I had nothing to show for my efforts – not that I would expect to at the first attempt at a new mark. As I sat waiting for a bite, I wondered whether  I was more, or less, likely to catch a big bass with bait or lures in estuaries. Using lures allows large areas to be searched, and  feels like a more targeted approach, especially at night – but is it as effective as bait? I know anglers who have caught big bass on both methods in estuaries, but for the specimen hunter, I think lure fishing has a slight edge.

The report on Bass Nursery Areas (BNAs) from CEFAS (Centre for Environment Fisheries and Aquaculture Science) has finally been published. As the report says, the original BNAs (37) were introduced in the 1990s, thanks in no small measure to BASS members like the late Don Kelley, to reduce the impact of fishing in areas where the majority of bass are likely to be below the MCRS (Minimum Conservation Reference size, currently 42cm). BNAs are thought to have played an important role in protecting the stock.

The report details 48 proposed amendments (including 39 new site designations) which were received from IFCAs (Inshore Fisheries and Conservation Authorities) and the MMO (Marine Management Organisation). The report cites a lack of evidence for many of these proposals, and whether ANY of them have been implemented is unclear.

Perhaps this is a question of the standard of evidence required being too high, since surely just the presence of favourable habitat conditions in typical nursery areas is enough to warrant the increased protection gained from BNA status, particularly when bass recruitment is so crucial to stocks and subject to fluctuations in climate and weather conditions at the time of spawning and over the winter.

This is why our juvenile bass survey work in Cornwall is so important, and if anybody would like to help with these please let me know; it really is very enjoyable and rewarding, and only takes up a few hours now and then. Page 15 of the above report shows the existing BNAs. If you think your area would benefit from setting up a BNA, why not contact your local IFCA about it? Better still, why not set up a juvenile bass sampling programme yourself, to demonstrate the need for this? I would be happy to pass on any information I have about this.

Finally, there does seem to be a few bass about down here in Cornwall, although the bigger fish still seem to be few and far between. It’s still very patchy though – the west of the county seems to be having the best of it, while other areas continue to find just the odd fish here and there, although I have very recently heard of some big catches of smaller fish.

Apparently there are lots of baitfish out there – just out of range of shore anglers! The usual mackerel ‘blitz’ we see in July didn’t materialise, so perhaps that’s one reason why many bass have stayed out;  perhaps it also explains the late showing of tuna, which have only recently been reported.

August was one of my better months last year, so I’m crossing everything that this year will be the same. It started off well last night – nothing big, but very enjoyable fishing. This is one of my favourite times of year, with warm, still nights, fishing in quiet conditions with light gear where you can feel every knock, and twist and turn of the fish as they fall for your slowly retrieved soft plastic lure in the darkness.

One of the bass I caught, a 49 cm fish, took the lure just as I was about to lift the lure out of the water. The first I knew of it was when there was a great splash as the fish tried to nail the Dolive Stick sandeel imitation as it was about to run out of water.

There seem to be jellyfish everywhere, especially the compass variety. Be careful if you come across these, as they can give a nasty sting. A friend of mine discovered this when we came across loads of these in our sandeel net – one of them leaving a nasty red mark on his arm. Unfortunately the sandeels were mostly too small to be of use.

It’s at this time of year that I eagerly anticipate the ICES annual stock assessment for bass.   As you’ll see from the graphs in the linked document, things are still pretty precarious with the Spawning Stock Biomass (SSB), and the spawning success (Recruitment) in recent years is nothing to write home about.

Given the state of the stocks, you might wonder why any changes in the Bass Fishing guidance for 2021 were made.  Not that these affect recreational bass fishing, which still only allows Catch & Release in Jan, Feb and Dec, and  two fish per day (over 42cm) from Mar – Nov. On the commercial side however, the Government have seen fit to allow shore based netting for bass, mostly in the Northwest, and in Wales; not only will this damage bass stocks, it could well interfere with the abilities of anglers to carry out their activities.

And there’s been more subtle changes – like the slight increase in bass allowed to be kept from trawls and seines, and the fact that bycatches of bass in nets only have to be ‘unavoidable’ if outside England and Wales.

I received an interesting email from angling friend, and legendary bass author (Hooked on Bass), Alan Vaughan about an unusual bass he had caught – a fish of 66cm which took an Evostix lure with a small lead-head. It was an exceptionally dark fish, with a large head, “a very energetic bass that gave the kind of fight that we all like”. Alan also noted that it was a slim fish, and weighed 5lb 2oz.

The weight for length and appearance suggested a recently spent fish, yet this would be unusual for this time of year, and the fact that it gave such a good fight also goes against this.

Alan also mentioned that it was a male fish. This is unusual in itself, since male bass over 4lb are very unusual. This got me thinking about length to weight comparisons used in tapes etc. Estimates for larger (4lb+) fish will mainly be based on female fish, since these predominate. So I wonder if the relationship for male fish might be different, and whether this might account for the lower weight of Alan’s fish?

The  fact that most larger bass are female also interests me. This is not unique to bass, and a recent scientific paper  suggests that this is because male fish are more active than females, so that less of the oxygen they obtain from their gills goes into growth; could this account for the excellent fight Alan’s fish put up?

The sex of bass is not genetically predetermined. Whether they become male or female is influenced by the water temperature during their early development (around 6 months), with warmer water  resulting in more males. Water temperatures are likely to increase with global warming, and are likely to exceed 20C on occasion in the shallow estuaries where ‘0’ group bass tend to live in the summer. So could we be seeing more male bass in the future? Will this mean more hard-fighting, but smaller bass? Which would you prefer? Come to think of it, would more, sexually mature, male bass (but fewer females) mean increased or reduced spawning success?

That’s it for this month folks. Thanks for reading, and if you enjoyed it please pass on to friends.