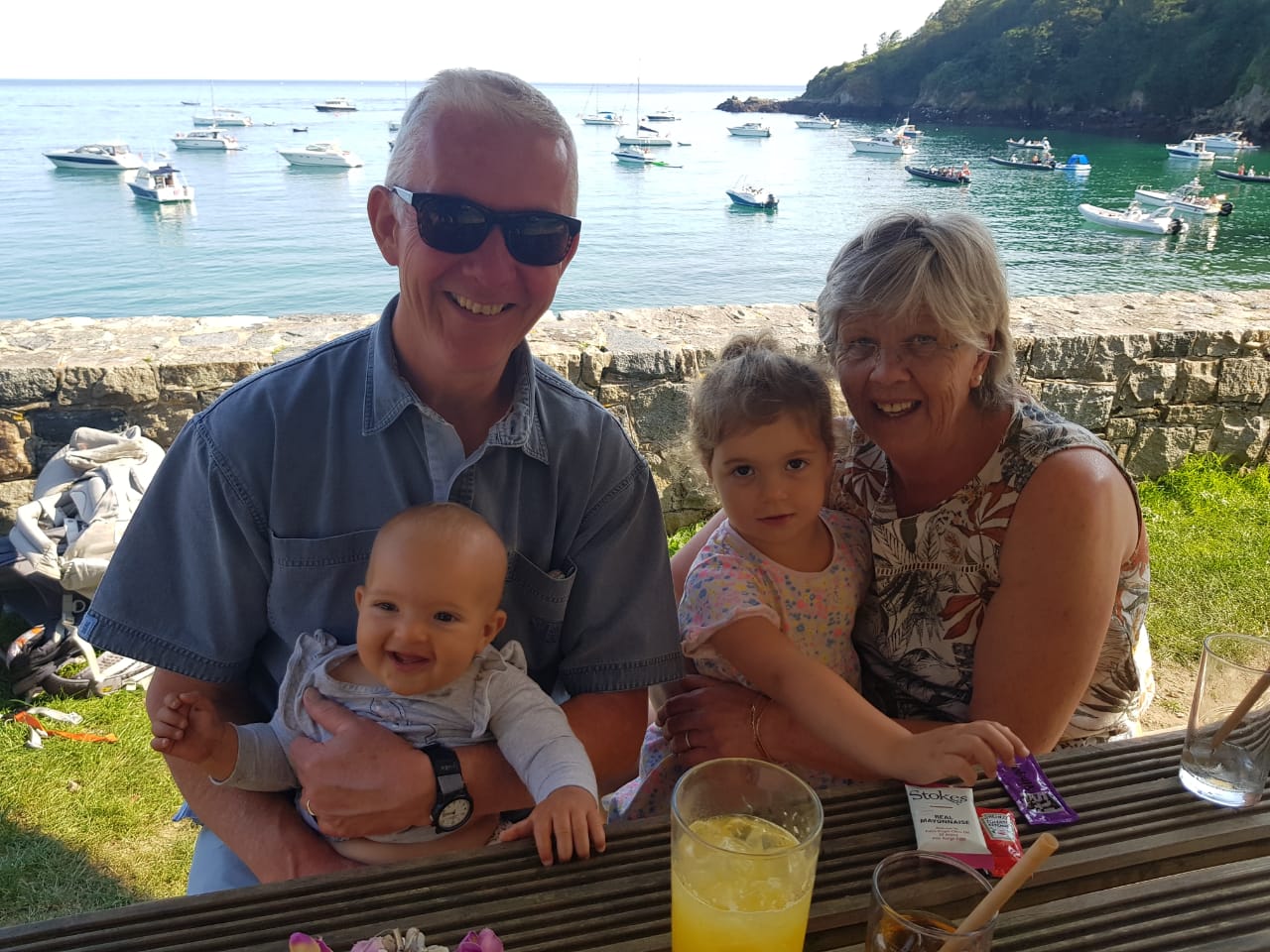 The last few weeks have seen me on my travels, visiting family and snatching fishing opportunities at home and away, as and when they present themselves.

Like many who have family in other parts, it’s been a while since I’ve been able to be with loved ones. After negotiating our way through self-isolation, with an obligatory Covid test at the end of it, Angela and I were finally able to be with Ben and his family, including our two wonderful granddaughters, on Guernsey. It was so nice to see them again for the first time in nearly six months. And it was so good to experience the simple pleasures of hugs, handshakes, eating out, and going for a pint as the sun goes down, in the Covid-free environment on the island.

Time was precious, having already lost a week of our visit in self-isolation, and not being sure when we could be with them again, so the emphasis was firmly on family, rather than fishing. And very enjoyable it was too, with some lovely weather and lots of memories to treasure.

Seeing the Red Arrows is one of the highlights of summer for me, but I had given up hope of doing so in this strange year. So when they roared across St Peter Port, suddenly appearing from behind us, you couldn’t help but be inspired and moved.

I did manage to squeeze in a couple of bassing trips with my Guernsey pals; I’m lucky to have such good anglers, and good friends to hook up with over there.

First up was a bait session with Bryn Le Poidevin. I had taken some frozen bluey along, which has produced good bass for me on Guernsey before, but when Bryn tempted me with some verm I was happy to use this instead – I’ve seen Bryn catch nice bass on this. It wasn’t long before a plump schoolie was rattling away on the line, and I’d caught my first bass on this bait.

Next up was a lure session with Simon De La Mare. Fishing Guernsey at night, moving over difficult terrain as the tide makes, calls for expert local knowledge, and I was glad of Simon’s expert guidance. Soft plastics were the order of the day – DoLives, Swimsenkos and Senkos, with a white DoLive finally accounting for another plump schoolie, after moving to a sandy bay in flat calm conditions.

Nipping out for a bass

Before heading off to Guernsey at the end of August the fishing back home was starting to pick up, with some enjoyable sessions, enhanced by valuable learning points.

I’ve never had a problem fishing neap (or ‘nip’ as they call them on Guernsey) tides, but on the very small ones I have come to the opinion that you’re better off fishing a lure with plenty of action, rather than a subtle lure like a DoLive Stick; I suspect the fish need this increased action/disturbance to gee them up on the smaller tides.  The tide on Thursday 13th August was at the bottom of the series, a very small  5.1m High Water (Newquay table). Despite fishing in good conditions, and at the optimum stage of tide in darkness, I could only manage one snatch and a couple of tentative bites on DoLives, Swimsenkos and Senkos, while Sam Wallace and friends caught numerous bass on aggressively worked surface plugs in daylight.

A couple of nights later, the tide had increased to 5.5m. This time I did catch – four bass (including a couple of 55/56cm), on a Swimsenko; the DoLives didn’t produce however. I’m left wondering if the Swimsenko’s paddle tail gave it the edge, in terms of lure action, on this (still quite small) tide height? Conditions were similar and the marks were in the same area.

Is your crab fresh enough?

Bait fishing a couple of nights later with Steve Ainsworth, I was enjoying some good sport, with a bite a cast on shore peeler crab. Steve however was having a lean time, and it became clear that the fish weren’t interested in his live sandeel or his two week-old crabs – as soon as he put one of my fresh (collected by me that morning) ones on he was straight into fish.

I ended up landing six, including three around the 57cm mark. One of these had taken the hook down too far (a risk when bait fishing with ‘J’ hooks). The hook could not be easily extracted, so I snipped the trace as close to the eye as possible. Alas, it was obvious that the fish wasn’t going to survive, and had to be despatched.

That fish has got worms

Interestingly, this fish had occasional tiny worms in its flesh. Steve had commented that fish he kept from this mark always had these worms, whereas he hadn’t noticed this in fish from other marks, so perhaps their presence is a marker for local stocks. Overall, it seems these are quite common in fish – one study found that 65-85% of bass can be infected with these anisakis worms (thanks to Mike Ladle for this reference), which they acquire by eating infected crustaceans. Eating raw or undercooked infected fish can lead to a parasitic infection in humans called Anisakiasis.

Getting back to prawns

I love using live prawns under a float for bass, but in recent times other methods have taken precedence. This is in part due to the effort of having to run a tank to keep them alive, which I have not done for several years. This limits you to using them as you collect them – in my case at low water in an estuary.

I recently came across an article in Sea Angler magazine, describing keeping live prawns in shallow trays in the fridge (at its warmest setting), filled with just enough water to cover them. A couple of such trays from the gardening section at B&Q did the job nicely. I filled one with water from my local estuary, and after allowing the water to adjust to the fridge temperature, I added a dozen or so medium-sized prawns. I changed the water after four days.

On day six the prawns were still live and kicking, so I decided to give them a swim on the coast that night. Using my standard 15g ‘Buldo’ float rig, complete with tip light fixed to the top, I cast out, eagerly anticipating this disappearing and shooting along, just under the surface, as a bass made off with the bait.

Alas there were few fish around that evening, but I did have a couple of really good takes. I missed both of these, and started wondering if the Varivas 1/0 circle hooks (simply tied onto the 15lb mono main line with the float adjusted to about 4ft above this) I was using in an attempt to reduce deep hooking were the case of the problem; Fish Locker  doesn’t seem to have any problems with Cox and Rawle 2/0 Matsu circles though.

It was foggy, very foggy. The sort of night I don’t like fishing on my own – especially where I had in mind. Just as well that Steve was up for it then. I had a sense of foreboding as we made our way down the cliff, with our headlight beams bouncing off the misty air, and attracting every moth in the vicinity.

All seemed to be going well when Steve landed a 6lber. In my haste to share in his success, I lost my footing and came down hard on both knees.

It’s funny how you assume you can just brush off these mishaps; fortunately all was well – not even a busted rod tip, but one day I know I won’t be so lucky. I thought that day had come when I was upended for a second time on the slippery rocks, hitting my lower back hard. Amazingly, I managed to avoid serious injury this time as well. Steve was just saying how I should get some boots like his, when he stumbled forward, nearly face-planting on his fishing box which was strewn across a rocky ledge.

The next day we both felt a bit sore in several places, but happily no bones were broken – just a few cuts and bruises. We reflected on the possible scenarios in the event of more serious injury, and determined that we should give our footwear some attention. Two old codgers we may be, but we’re not giving up on this mark just yet!

The Chug Bug (4 3/8″, 11cm) is a legendary surface lure, but for some reason I had never fully got to grips with it. Inspiration from Alan Vaughan, who has caught many good bass on it (and some big stripers) made me dust off one which was lurking in the draw of passed over lures, and vow to prove them.

Fishing in an east wind and a roughish sea, my first choice shallow-diving plugs weren’t producing. A switch to a black and chrome Chug Bug brought instant success.

Simply turning the reel handle one turn at a time is sufficient to get it spitting water out well enough for fish to notice it, even in these conditions.

The first of the three fish I caught on the Chug Bug felt odd when I was bringing it in. The cause was clear – the rear hook had become embedded in the fish’s flesh just above its eye. I have never been convinced of the need to flatten hook barbs – until now. I really struggled to get the hook out, and this can’t have been good for the fish. OK, it’s unusual to hook a fish in the flesh like this, and there isn’t usually a problem with lip-hooked fish, but I’m minded to start doing this now. Having made the change to single hooks, in the interests of increased post-release survival, the extra step of flattening the barbs with some pliers, even if of modest value, now seems logical. It might also increase the chances of the hook coming out in the event that your line breaks with the plug still in the fish’s mouth, not to mention those hook-in-finger accidents!

The Autowalker 115s is a surface lure with a difference. It ‘walks the dog’ simply by using a medium speed, steady retrieve, without any rod action. It also casts like a rocket!

I acquired one of these (in the EMIL colour) a while ago, but had only given it cursory attention. Buoyed by my recent success with the Chug Bug, I decided now would be a good time to try to prove the Autowalker as well.

Despite shallow divers not working, the first cast with the Autowalker produced a knock; four fish later I was convinced – only small fish but that probably just reflects what was out there, rather than the lure’s fish-catching abilities. As if to prove the point, the next evening this hard-fighting 59cm bass took the Autowalker virtually as it landed; these things are lethal!

That’s all for this month folks. The fishing should be good over the next couple of months – as long as the weather doesn’t misbehave too much!

PS I’ve had some more nice feedback on my book. If you’d like to see this please check out the book reviews page of my website.