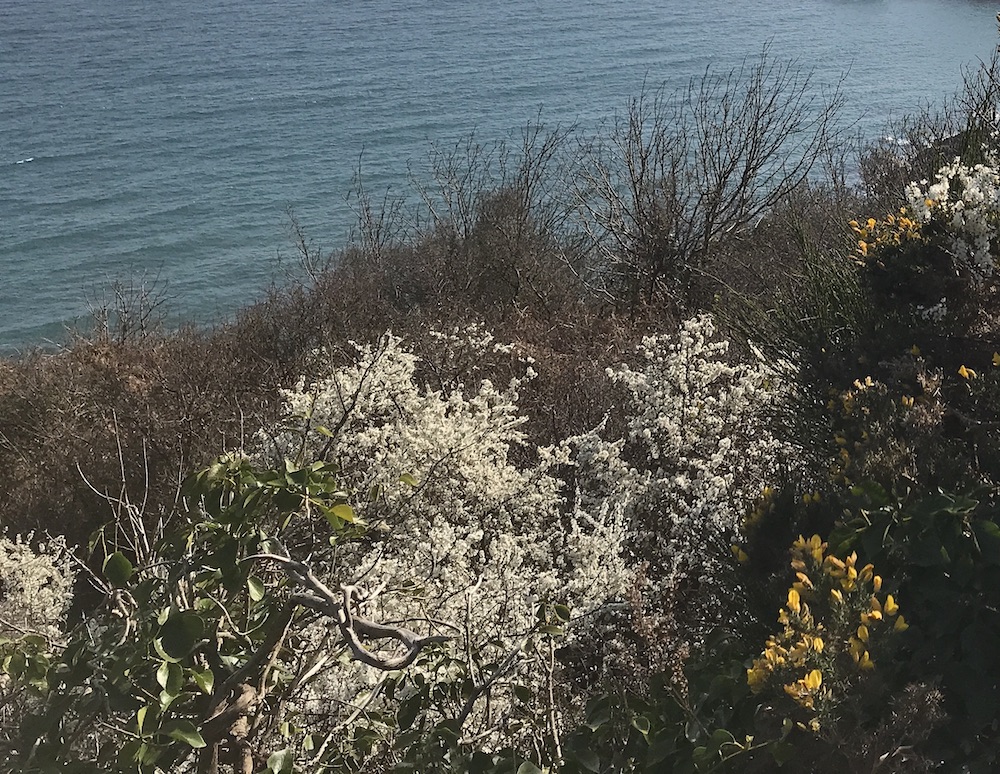 As the blackthorn flowers come out, and the heady coconut smell of gorse is in the air, it’s nearly time to start bassing again. My head is filled with thoughts of what might unfold in the coming season. What will the fishing be like? What will be the highlights? What new things will I learn? What new friendships will be forged?

Last year was memorable for me in that I finally got to grips with estuary fishing for bass. To begin my 2022 campaign, while I establish at what point the fish come into estuaries, I’ll be using the same tactics (soft plastic paddle tails – mostly unweighted), at the same marks as last year.

During my ‘close season’ I usually try to explore potential new marks. This year my focus has been on estuary marks. There’s a certain peace and tranquility about these places, and with their wealth of wildlife they are very pleasant places to fish. Knowing what to look for certainly helps – areas where there is lots of crab-containing weed cover, and I’ve got several new spots to try once the fish are in.

I needed that break

Although I haven’t been fishing much over the last couple of months, I have been busy with other things. It’s amazing how much time fishing takes up when the season is in full swing, so the downtime not only refreshes my fishing appetite, but gives me time to catch up with a growing list of other activities, both fishing-related and domestic.

Before we can start the juvenile bass survey programme for the year there is quite a bit of preparatory work to get through. This includes applying for a permit to net in the Fal, Helford and Camel estuaries for scientific purposes, updating risk assessments and arranging insurance. This year I’ve even attended a First Aid course. Hopefully everything will come together in time for our May 1st start.

I’m gradually getting to grips with being a general member of Cornwall Inshore Fisheries and Conservation Authority. I have to say it’s been a positive experience so far, and I would recommend anglers to apply should a vacancy arise.  Anybody interested in applying, or just finding out a bit more about how IFCAs work, should find the recordings of the Angling Trust webinars with IFCA Chief Officers informative.

CIFCA are working through the objections to the proposed Salmonids byelaw. They hope to liaise with the main objectors, to see if concerns can be resolved, and report back to the June meeting (17.6.22). Although this byelaw is primarily aimed at salmonids (salmon and sea trout), it should also afford some protection to bass and other seafish. Note that all CIFCA meetings can be attended by the public or watched via webcast. Details of meetings can be found here.

I’m pleased to say that CIFCA have agreed to hold at least one public meeting with anglers over the next twelve months. I think these are a good opportunity for IFCAs to engage with anglers, and understand their concerns; likewise it allows anglers to appreciate the limitations under which IFCAs operate, and the needs of other stakeholders. In this way it is possible to build trust and support between both parties while taking the sea angling agenda forward.

Defra are consulting on the Joint Fisheries Statement (JSF), a key part of the new Fisheries Act. While I think it sets out some excellent policies for managing fisheries, I feel it fails to reflect the importance of Recreational Sea Fishing/Angling. Not only does this generate considerable economic and social benefit for coastal (and inland) communities, its environmental foot print is low. The JSF document is a lot to get through (80+) pages, and the deadline (12th April) is nearly up, so if you haven’t got time to respond yourself have a look at the Angling Trust’s response.

Devon & Severn IFCA are undertaking research looking at the discard survivability of bass caught in short 100mm gill nets set for gilthead bream and mullet in the Salcombe estuary for limited short soak times (up to 1 hour). The results of this research will be published in due course, and are awaited with interest.

I’ve been impressed with the way that the CFSA are moving with the times. One example of this is their approach to the competitions they run. It is now possible, in most situations, to register fish using video’d footage of the fish being weighed, enabling the fish to be released alive.

Another example is their excellent Recorder’s report. Included in this are the issues of climate change and offshore commercial fishing. I include notes from the report below:

Climate change has brought novel species like gilthead bream to our shores, moving up from the Bay of Biscay.  Recent years have seen an explosion of spider crabs, and this has made rock fishing virtually impossible until they shed their shells and return to deeper water in late July. Bluefin tuna are now a common sight in Cornish waters. Their presence seems to be affecting other species too, particularly baitfish, which in turn may be having an impact on the species we like to catch. 2021 was very unusual for the absence of mackerel around Cornwall throughout the summer months. Sandeel populations have also declined substantially, which may be reducing food availability for some species. These changes may have been partially offset by the increasing number of pilchards and anchovies which are being seen and caught.

High levels of offshore commercial fishing effort are being directed at the waters around Cornwall, particularly by EU vessels to within 6 miles of the shore. It’s hard to see how this can be sustainable, either for recreational sea angling or our local inshore commercial fleet. The sheer scale of these fisheries is turning the inshore waters around Cornwall into an underwater desert. This is particularly apparent with flatfish, with very few turbot, plaice or dabs being caught by anglers in areas where they were once common.

There are particular concerns around the ‘Trevose Box’ where large numbers of trawlers target this spawning ground for flatfish (and other species) as soon as it reopens after the Feb 1st – March 31st closed period, potentially undoing all the good that has accrued during this time.

Organisations like the CFSA need our support. I have recently volunteered to be its Conservation Officer, and have been coopted onto the Committee.

The BASS Science group has been developing a Catch Recording Scheme. Some of the findings from the first year of running this on a trial basis have already been shared at this year’s virtual AGM, and an article will appear in the next BASS magazine.

The scheme aims to give members information about fishing quality in various parts of the Country, and information about bass biology such as year class abundance and growth. It is hoped that in time this data will also be of use to our campaigning team. Results are anonymised and locations are only recorded to County level.

If you would like more information about the scheme please get in touch via my Contact page. The more anglers who participate, and the more areas we cover, the better and more detailed data we can provide. You’ll have to be a member though, so if you aren’t one already, why not sign up for the modest sum of £25.

The Marine Strandings Network in Cornwall is run by the Cornwall Wildlife Trust. Their data, collected by dedicated and local people, is recognized by governing bodies and used by scientists to better understand our coastal marine megafauna and the pressures they face. Their research has put real and significant pressure on government to tackle significant threats like bycatch (accidental entanglement in fishing gear) which we have proven to be one of the top causes of death in dolphins and porpoises. The science has uncovered some fascinating discoveries like the threat of bottlenose dolphins on porpoises through their fatal attacks. All of this has been led ultimately by citizen scientists. With thanks to Ruth Williams, CWT.

If you see dead dolphins, seals, sharks, seabirds, jellyfish and other marine wildlife on the shoreline of Cornwall and the Isles of Scilly, please contact the Marine Strandings Hotline Emergency Number on 0345 201 2626. If you’re interested in becoming a volunteer recorder, email the organisers on strandings@cornwallwildlifetrust.org.uk

I recently attended the stranding of a Risso’s dolphin. This was quite a challenging assignment, given the vagueness of location reported, and the positioning of the stranding. Fortunately I know the stretch of coastline well, and was able to locate the stranding fairly easily. It looked like the poor animal had stranded during recent gales, and was stuck fast in some rocks near the high water mark.

We normally like to get photos and measurements from all angles, but its position and weight prevented me from moving it. But with a bit of crawling under rocks, I managed to get sufficient photos for the animal to be identified and recorded.

As often seems to happen in March, some nice bass have been caught. Well done to the canny and hardy souls who brave the cold weather at this time of year.

Cornwall anglers Rob Taylor and Dave Noble got among the fish. Rob had a great fish of 8-9 in mid-March on lures, in bright sunny weather and east winds. Dave had a 7-15 beauty, a new PB,  at the end of March. He caught the fish on whole joey mackerel (with tail and half the head removed) just as the sun was going down. The bait was supplied by Camborne Sea Baits.

Bill Morris had several nice bass while fishing a Bristol Channel shore mark. Bill commented that the fish were spawning, and could see eggs running from the fish. Research suggests that bass spawn in the Celtic Sea. Bill adds that by mid April – May all the fish he catches are spawned out.

Terry Blampied from Jersey got a surprise when the bass he landed had a lamprey stuck to its side! Goodness knows how long the fish would have survived if Terry hadn’t caught it, and removed the lamprey. These things are pretty gruesome, attaching their mouth by suction to their prey which allows their tongue to tear at the flesh of their prey and drink its blood!

I don’t have any links with, or promote tackle suppliers, but I do like good service when I see it.

Some recent examples include Bass Lures UK who went out of their way to provide a tailored product to suit my individual needs, supplying a pack of very bassy-looking soft plastic paddle tails. These Flash J style shads look like they will be very effective for estuary bassing. The complimentary smaller versions they also sent should prove particularly attractive early in the season when bass are likely to be feeding on summer fry.

Rooney’s Fishing Supplies know how to turn a negative customer experience into a positive one. An order for some Owner Twistlock hooks ( the light Gary Yamamoto style ones I like so much) hadn’t arrived, so I contacted the proprietor.  He was eager to put things right, and within a few days the hooks were delivered, with an extra pack of 5/0’s thrown in. He was very apologetic, but It wasn’t his fault that the hooks had gone missing in the post.

That’s all for this month folks. Thanks for reading.